The low and rocky western part of the island with a winding coastline alternates with coastal ramparts and sand dunes in the east. The vegetation is dominated by coastal and wooded meadows and heaths. In the eastern part of the island there is a predominant pine forest, which offers good protection from the wind. The dunes are up to 9 meters above sea level. The highest point Kullamägi reaches 10 meters above sea level; according to rumors, gold of pirates has been buried there.

The island was once inhabited by coastal Swedes. Later, fishermen and sealers of Estonian and Finnish origin settled there. There are currently three villages on the island -Kelnase, Idaotsa, Lääneotsa.Nearly 100 inhabitants live there. The island has many different types of accommodation establishments and everything necessary for life, such as Prangli elementary school, shop, medical point, post office, Prangli community center and restaurant

What to see and do on the island:

Eestirand - In 1941, German fighter jets bombed a steamer near the island of Keri Eestirand, which transported about 3,500 men forcibly mobilized into the Soviet army in Kronstadt. The captain led the damaged steamer to a shallow near Prangli and 2762 men are known to have escaped to the island. The island has a graveyard with a dolomite pillar and a wooden memorial cross.

Gas hole- In 1924, oil exploration and a gas discovery were discovered on the island. Gas wells were added in 1946-1960, but then it became clear that initial estimates of the amount of gas had been erroneous and that gas extraction was not economically viable. Today, the gas hole has become a place of interest for visitors to the island. It's nice to grill on a gas hole in the middle of the forest. 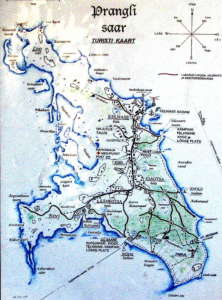 Prangli Laurentius Church - Lääneotsa. The village has a beautiful wooden church built in 1848. The church was thoroughly renovated in 1860, during which an organ was installed there.

Museum of the Pranglis Islands - Museum in the village of Lääneotsa, which introduces the Prangli Islands (Small– ja Great Prangli) related to cultural heritage.

Take a walk in nature – The island has many small forest trails, along which you can visit the  boulders and stone sowings, amongst the boulders are bigger and better known The Red Stone (it has a circumference of 31.1 m, a length of 11.1 m, a width of 8.8 m and a height of 3.3 m.) and The Eagle Stone(circumference is 19 m and height 3.5 m.)

Swimming – Visit the soft sandy beach in the south Prangli, near Mölgi Harbor. Mölgi beach is the only sandy beach on Prangli.

Country sauna - In the Ülesaare camping complex you will find a very pleasant sauna, which is a cave sauna built of sea stones directly on the sea shore. This ensures that the steam is never too sharp in the sauna, but is always soft and fairly moist. The country sauna is located directly on the sea shore and the sauna window offers a direct view of the sea, and after the hot steam, it is also very nice to go to cool off at sea.

Holiday - Many have said that the island of Prangli has a strange charm that no one can write down exactly, but should experience it for themselves. Namely, on the beaches of Prangli, most people have an indescribable feeling of peace. It is a place where all everyday worries are left behind and it is time to enjoy the natural beauty and focus only on yourself. Several accommodations like Ülesaare camping, Praaga Farm, Mardi Farm and others offer you a comfortable and peaceful accommodation service for your holiday on Prangli Island.